Thank you. Your purchase was successful.

A receipt was sent to your email. 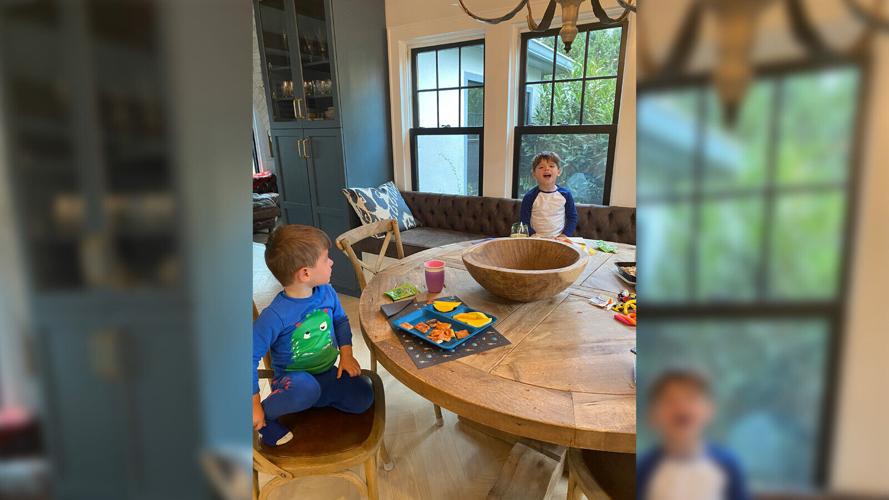 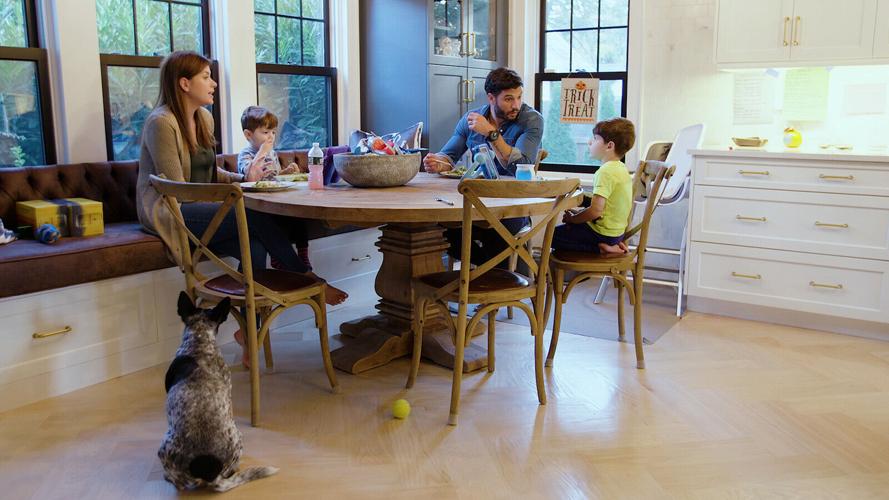 CNN's Chloe Melas sits down to a meal with her husband, Brian Mazza, and sons Luke and Leo, far right. 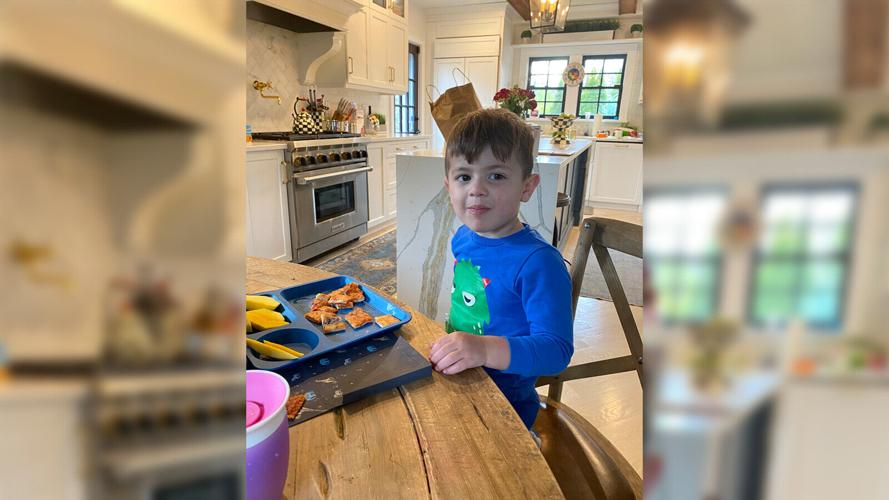 Children's picky eating overtaking mealtime suggestions. Introduce your child to new foods by putting a few other options on the table.

CNN's Chloe Melas sits down to a meal with her husband, Brian Mazza, and sons Luke and Leo, far right.

Children's picky eating overtaking mealtime suggestions. Introduce your child to new foods by putting a few other options on the table.

"Who wants spaghetti?" I call out to my children as I peer into our pantry.

I bring the water to a boil, toss in the pasta but absolutely no sauce because my kids prefer it with butter.

I ask the boys what color dinner plates they want. Without fail, my 4-year-old yells out, "I want green!" while my 2-year-old throws his hands out toward the other with excitement, "Blue, blue, Mommy!"

I toss the plates down in front of them with a side of sliced strawberries and some diluted apple juice in their sippy cups, and I pour myself a glass of wine.

I feel accomplished, but 15 minutes later that feeling dissipates. My children haven't touched anything on their plates minus a few berries.

"No like!" my youngest pouts. Without looking up, the 4-year-old says, "I want a Popsicle."

Here we go again, I think to myself. The next 30 minutes consists of me bribing them to eat just a few more bites in exchange for something sweet.

I find myself giving my home-cooked meals to our dog, Franky. She's the best-fed member in our house.

It turns out that my dinnertime drama is far from unique. Picky eating is common among young children. Up to 50% are unwilling to eat vegetables or try new foods, according to the National Center for Biotechnology Information.

Putting together a meal for my children is half the battle, whether they eat it or not, psychologist Alli Delozier told me in a recent interview.

"Take the pressure off of eating at the table," Delozier said. "Simply by putting the foods on their plates or on the table, you're doing a great job as a parent because you're still exposing them to those foods. They see 'em, they smell 'em, they can touch 'em, they can taste 'em. And every time they get that exposure, they're one step closer to learning to like that food."

Several parents in my circle of friends told me to check out an Instagram account called "Kids Eat in Color." Jennifer Anderson, a registered dietitian, created the page, amassing more than 1 million followers seeking what she says is "evidence-based information and strategies for child feeding and nutrition."

"This is the age where (your children's) biggest power is to say no and to have opinions," Anderson said. "And so, this is totally expected. You're not doing anything wrong."

As for my anxiety when my children don't eat their food? Anderson said that's normal, too.

"What happens though is when kids are saying, no, we often as parents get really concerned, like, 'Oh my gosh, they're not gonna eat. They're not gonna grow. They're gonna be sick.' ... And so out of that fear, we do a whole bunch of things," Anderson told me.

"We put a screen in front of them so that they eat better. We make them what they want. We kind of say, 'OK, you can eat all day. I'll follow you around with this spoon,' " she added. "We've all done it, like chasing the toddler around, 'Take one bite.' We start saying things like, 'Take one bite or I'll take the iPad away. Take three bites before you can get down.' And then we start requiring these things from a toddler whose biggest power is to be like, 'You tell me to do that? No way.' And so, we kind of fall into these habits that they really work against us in the long term."

My kids want chicken fingers every night. Is that OK?

According to both experts, yes -- feed your kids what they want to eat.

"They don't have to eat it ... if they don't want to eat it, and we respect that. We're actually setting the foundation very early on that they decide that they get to choose what is happening to their body, and it has far-reaching effects for so many things."

And make it look fun! Your child's plate should be colorful.

"Every different color is caused by chemicals in the food that are doing specific things in our body," Anderson said. "When we think, 'Hey, I'm serving a wide range of colors to my child,' I know that they're getting nutrients without obsessing over specific things. Did they get enough vitamin C? Calcium? Did they get enough magnesium? So if they're eating in color when they're kids, or at least if they're exposed to it, they're more likely to eat a more varied diet later."

What about introducing new foods? Yes, that's a good idea, the experts said. You should still expose your children to new foods by putting a few other options on the table.

"Do you have to put everything on their plate? No," Anderson said. "If you have a kid who is like, 'I don't like peas.' I like to actually put what I call a micro-portion on their plate. This would be like one pea. It's not scary, but they're still getting that exposure."

"And say something like, 'These are the foods available for the meal. You can choose what to eat from what is here.' "

What about sweets? Delozier said that treats are fine but not to tie them in as a reward.

"It's so easy to say, 'Well, if you finish your green beans, you can have a Popsicle.' We have all fallen into that trap, but letting them just have the thing and not putting it up on a pedestal and not making it like a food reward can be helpful. And then you get to decide how often feels right for your family, whether that's having dessert every night or having Popsicles after school or having it once a week. That's really just up to you."

Some do's and don'ts from 'Kids Eat in Color'

I tend to let my children play with toys or watch their iPads during mealtime, but both experts told me I should stop.

"We really try to make it a calm eating environment where they can focus on the food and the connection with the family members," Delozier said. "We don't want to have screens at the table. We don't want to have like toys and things like that. And that's something that can take some time to transition away from."

When should you be concerned?

But there are situations in which it's more than just picky eating. At what point should you seek a medical professional?

"When you have a child who is not on their growth curve, who their pediatrician is concerned about who isn't gaining weight, especially if they're losing weight, those are all definitely reasons to be concerned," Delozier said.

Over the last week, I've stopped the bribes, and I've tried micro-portions. I've noticed a gradual increase in the amount of food my kids are eating. Ultimately what I've learned is that there's no linear path to mealtime.

"As a psychologist and as a mom, I can say that so much of our beliefs about what children should eat and how we should feed our children are informed by our own beliefs about food and how we feed ourselves," Delozier said. "Take foods off a pedestal (and) make it more neutral. (Then your kids are) more likely to then be able to tune into their hunger cues and eat based on hunger and make choices that are consistent with your family values."

Welcome to the discussion.

Keep it Clean. Please avoid obscene, vulgar, lewd, racist or sexually-oriented language.
PLEASE TURN OFF YOUR CAPS LOCK.
Don't Threaten. Threats of harming another person will not be tolerated.
Be Truthful. Don't knowingly lie about anyone or anything.
Be Nice. No racism, sexism or any sort of -ism that is degrading to another person.
Be Proactive. Use the 'Report' link on each comment to let us know of abusive posts.
Share with Us. We'd love to hear eyewitness accounts, the history behind an article.

You don't have any notifications.

Get up-to-the-minute news sent straight to your device.

Check your email for details.

Submitting this form below will send a message to your email with a link to change your password.

An email message containing instructions on how to reset your password has been sent to the e-mail address listed on your account.

Thank you. Your purchase was successful.

A receipt was sent to your email.